Coronado to Panama City by bus 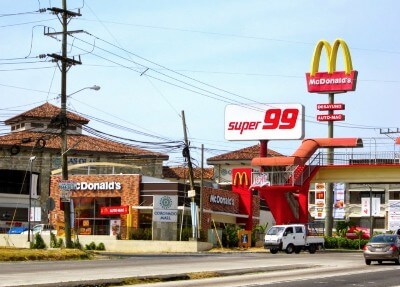 With a ride to the city from Coronado costing upwards of $100.00, many are opting to take the bus.

Taking the bus from Coronado to Panama City is actually quite easy, while it might require a little more patience and a tiny bit of Spanish, it is an adventure we recommend that can save you some money.

Busses going to Panama City leave Coronado every 10 to 15 minutes, going directly to Albrook terminal in Panama City for about $2.50,

There are buses going to Panama City from 3:00 a.m. until 12:00 midnight every day, including Sunday.

The majority of buses that pass by will be coaster buses (small white buses), with the exception of a few coach buses and the odd diablo rojo. Buses pass every 10 - 15 minutes every day of the week.

On weekends buses can fill up quickly, so leave yourself some extra time. The majority of buses that pass will be going to Panama City, some, however, will make more stops. This is where the little bit of Spanish might be useful - asking the driver if he is going directly to Panama City.

The closest bus stop in Coronado going toward Panama City is in front of the Coronado Mall (Super 99 and Mcdonalds) just past the walking bridge that goes over the highway.

Want to get there for less without the unknowns that come with taking the bus? Call the team at "Get there for Less" for reliable transport options starting at $99.00. While the bus is an adventure, sometimes a comfortable SUV, with a bilingual driver is nice too!