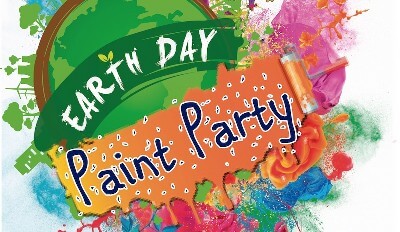 Join the Coronado International School (CIS) at the Playa Serena public beach entrance Saturday April 22nd at 3:00 p.m. to celebrate Earth Day with some fun in the sun. The students will be painting the new wall to the entrance of the beach. The wall will be environmentally themed, everyone is welcome to participate.

Bring friends and family and enjoy the afternoon creating a mural that will encourage environmental consciousness in a location that the community has been working to keep clean. The public beach access is a place where garbage collects typically during long weekends and holidays when an influx of people head to the beach. However, with improved infrastructure (trash cans that are emptied regularly) and notices discouraging littering, we’ve seen improvement.
This Earth Day the students CIS aim to create even more awareness about the importance of not leaving behind trash on the beach by painting this message for everyone to see! Join them. Bring a brush and a bottle of water. If you have extra water based paint for exteriors bring it along as a donation. The sun will likely be shining down so it is recommended to bring a hat and suncreen.

The date marks the anniversary of the birth of the modern environmental movement in 1970. Earth Day, celebrated around the offers a voice to that emerging consciousness, channeling the energy of the anti-war protest movement and putting environmental concerns front of mind. On April 22,1970, 20 million Americans protested for a healthy, sustainable environment nation wide.

Earth Day founder Gaylord Nelson, was a U.S. Senator from Wisconsin, who thought up the idea after witnessing the 1969 oil spill in Santa Barbara, California.  Nelson was inspired by the anti-war movement taking place at the time and used that movement to create consciousness about air and water pollution.

Today, Earth day is an important day around the world as there are even more challenge for the environment. Join the effort to create awareness in the community by helping paint a mural, donating paint or creating change in your daily routine to become more environmental. Use reusable bags, recycle or pick up a piece of trash of the beach. Even small actions can make a big difference.