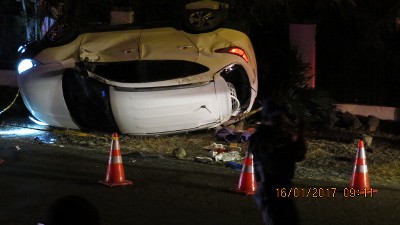 A reader tells us that at 9:00 p.m. on the night of February 15th a high speed chase took place inside Coronado, near the Coronado Bay entrance.

Police were in pursuit of a white vehicle heading out of Coronado. The reader explained that as they were slowing down to make the turn for the Coronado bay, the car being chased lost control and flipped.

According to witnesses he was coming at very high speed and slammed the breaks while turn his wheels to avoid a collision.