Guide to the 2017 Boquete Jazz and Blues Festival 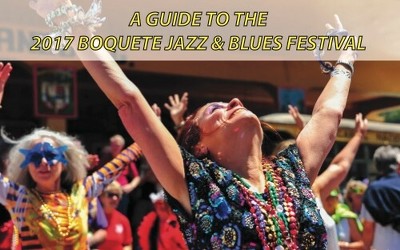 The 11th annual Boquete Jazz and Blues Festival (BJBF) is just around the corner and people throughout Panama, (and globally) are getting ready to head to the highlands.

Known as the biggest little festival in the world, the festival grows each year, catching the attention of international performers and music lovers alike. This year the festival is set to take place Feb. 9th until the 12th.

BJBF is an annual non-profit event that is organized primarily by volunteers. The event began taking place in Boquete in 2007, primarily featuring local Jazz acts. In 2011 the festival began hosting Blues talents, and the years following the festival started attracting top-notch Jazz and Blues acts from all over the world. John Wolff the festival’s producer says each year the festival grows, John told us, when he picks up the phone, and a big name artist is on the other line, these days he believes it.

THE BJBF MUSIC FOR SCHOOLS PROGRAM

While BJBF is of course about spreading the joy of music among music lovers, it is also about fostering a passion for music in local youth. In an effort to ignite a passion for music in kids, the festival has been donating 100% of it’s profits to support a local program called “Music for Schools”, bringing musical instruments into the classroom throughout the town of Boquete.

Visitors to the BJBF are directly supporting the Music for Schools program! So far the foundation has donated $7,300 to local schools, this year they hope raise even more money to go towards improving musical education in Panama.

This year’s line up for the Boquete Jazz and Blues Festival is full of great artists! The line-up includes the world-famous Joe Louis Walker who was recently nominated at the 2017 Grammy Awards.  Joe Louise Walker will take the stage on Wednesday, Thursday and Friday in Boquete.    Music will kick off on Wednesday evening, at The Rock, a beautiful restaurant beside the Riverside Inn Hotel. The event, a dinner show featuring Joe Louis Walker, Deanna Bogart, Ron Hacker and Lance Anderson, is sure to be an amazing event.

The annual Parade will officially open the festival on Thursday February 9th. The Parade goes through Central Park,  with folkloric groups, music students from one of the local schools, and a police marching band. Following the parade, Rigoberto Coba Big Band with Lee Oskar of Lowrider Band, Shuffle Demons, and Spicy Latin Jazz Band will be performing in the central park.

GETTING TO THE BOQUETE JAZZ & BLUES FESTIVAL

To get to the town of Boquete from Coronado by car it takes about 5 hours. You are going to want to start the drive early, as it’s a better trip in the daylight. Taking the InterAmerican highway towards David drive through the town of Santiago. Up to Santiago, there are restaurants and fondas where you can grab a bite for lunch. After Santiago, there are less roadside stops, so be sure to fill your tank is in Santiago.

In David, the turn to Boquete can be easily missed. The landmarks to look for are, a big box store called NOVEY and a TGI Friday’s. Turn right at the intersection (there is a stop light) and follow the road up to Boquete. This road will soon be a two lane divided highway.

Driving note: While on the road to Boquete, about half way up, keep right on the fork at the Terpel Gas station.

THE TOWN OF BOQUETE

The town of Boquete is nestled foot hills of Volcan Baru, with roads winding around steep and narrow corners. Often there is a light, misty rain, creating breathtaking rainbows in the valleys. With a temperature around 75 degrees most of the year, the climate feels like spring, a refreshing escape from the beach humidity.

Boquete is well known for coffee so if your a coffee lover you are in luck! The mountain climate allows for coffee plantations that produce some of the world’s best coffee. Another attraction in Boquete are the flowers and fresh produce which also grow well in the mountain air. Each year Boquete hosts a flower festival which attracts people from across Panama and the world. The flower festival takes place before the Jazz & Blues festival in the month of January. The area is also popular with birdwatchers and hikers. Adventure seekers may enjoy a white water rafting trip down the Caldera River or one of the best zip-lines in Panama.

With access to fresh produce there are a number of very good restaurants in the mountain town.  During your stay be sure to dine at The Rock and Panamonte Hotel. Both restaurants offer fantastic service, fresh food and a selection of nice wines. One of the treats of being in the Chiriqui region, is access to river trout. The mountain region offers access to rivers stocked with fresh trout (trucha).

WHAT TO BRING TO THE  BOQUETE JAZZ & BLUES FESTIVAL

While the #1 thing to bring might be your dancing shoes, with a line up that will keep you on your feet all day long, your also going to want to remember some essentials like sunblock and a hat.

Here is a list of things you will want to remember to back for the BJBF:
- Sunblock
- Hat
- Water bottle
- Camera
- Light breathable clothing
- Walking shoes
- Your ticket
- Cash
- Passport / National ID