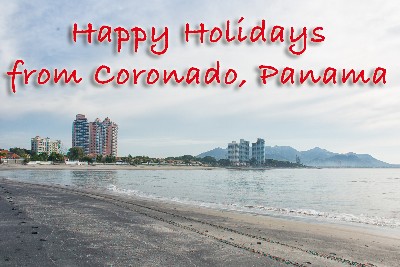 It is almost time again, time to celebrate Christmas and Hanukkah from the beach in Coronado Panama.

Just as we expected, the sun is shining and the wind is starting to blow at the beach in Coronado, bringing us Panamanian summer weather just in time for the holidays.

While the holiday season in Panama starts early, as the country takes the month of November to celebrate independence and national pride, December is an especially busy month in Coronado Panama and Panama City. The festivities begin early in December when mothers, aunts and grandmothers are celebrated on December 8th, which is Mother’s day here in Panama.

Mother's Day takes people all over the country to visit family and spend the day with their moms. The next holidays celebrated in Coroando and throughout Panama are Christmas and Hunukkah. Expect the roads to be busy starting December 23rd as people travel to Coronado Panama, and surrounding beaches to spend the holidays with family and friends.

Stores and malls throughout Panama have already had their decorations, Christmas trees and nativity scenes, out for over a month. People have saved up to buy special presents for friends and family. Starting early in December, many houses are decorated with lights and some even bring home a freshly cut Christmas tree that has been imported all the way from Canada. Others dress up local trees, like tall palms and banana trees.

From the 16th of December until the 24th (Christmas Eve), many Panamanian communities hold what is known as "posada”, an event that celebrates the birth of Jesus. Families build makeshift ‘inns’ with palm leaves, and the family will act as innkeepers, children are chosen to represent Joseph and Mary in a pilgrimage looking for lodging, for the event of Jesus’s birth. Each night the children leave the community church toward a posada followed by a procession, where candies are given away to the attendees. On Christmas Eve, the last day of the posada, all the "inns" in the community are visited.

Family gatherings and meals at Christmas in Panama are similar to those in North America, with a few additional items on the menu. Relatives gather in homes to prepare dinner. Items on the Christmas menu include turkey or ham, rice with guandu and tamales. Apples, pears, grapes and nuts are a staple at the holiday table.  The traditional bread, rosca de huevo (A ring shaped egg bread) and rum punch are also a must!

In Panama the Christmas celebration typically begins on the 24th. Gifts are places under the tree and children unwrap their gifts at midnight before bed.

Panama has a large Jewish community who will celebrate Hanukkah starting on December 24th. While the details of the celebration of Hanukkah (the festival of lights) look quite different from Christmas, the spirit remains the same.  This year, Hanukkah will start the evening of Saturday, December 24 and will end the evening of Sunday, January 1, 2017.

Judaism in Latin America dates back to the discovery of the New World. It is thought that newly converted Christians, conversos, of Jewish ancestry, fled Europe during the inquisition and settled in Spanish and Portuguese colonies in the Caribbean. Once settling they returned to their original faith, Judaism.

Today, there are up to half a million Jewish people living in Latin America and about 12,000 and 14,000 in Panama. Panama has the largest Jewish population in Central America.

Much like Christmas, Hanukkah brings families together in the kitchen and at the dinner table. Hanukkah traditions typically include the lighting of a candle on the menorah each night during the preparation of special foods, particularly fried jam filled donuts known as sufganiyot.

As we enter another holiday season at the beach, a new summer and year, we wish you and your families a Merry Christmas, a Happy Hannukah and a fantastic New Year from Coronado Panama!