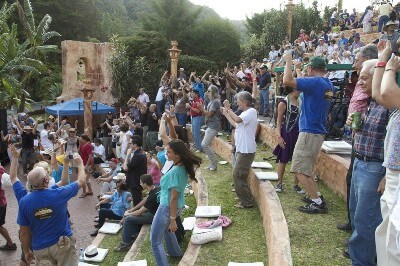 The schedule for this year’s Bouquet Jazz and Blues festival is full of great artists, including the world-famous Joe Louis Walker, recently nominate for the 2017 Grammy Awards.

The schedule has been changed to accommodate Joe Louis Walker attending both the festival and Grammy award ceremony, which will take place on the last day of the festival February 12th. Joe Louise Walker will now be performing in Boquete on Wednesday, Thursday and Friday instead of Friday, Saturday and Sunday.

While the festival does not officially begin until Thursday, music will be in the air starting on Wednesday. Things will kick off on Wednesday evening with a dinner show at The Rock where Joe Louis Walker, Deanna Bogart, Ron Hacker and Lance Anderson will be performing.

The event will officially open Thursday, February 9th with a parade through Central Park, the performance of folkloric groups, music students from one of the local schools, and a police marching band. Following the opening event, Rigoberto Coba Big Band with Lee Oskar of Lowrider Band, Shuffle Demons, and Spicy Latin Jazz Band will be performing in the central park. In the evening there will be an open mic at the Baru and a Jam secession hosted by Grammy Nominee Joe Louis Walker at Mike's Global Grill.

Friday the 10th,the day will begin at 11:00 a.m. with Guy Davis, Dwayne Dopsie, the Zydeco Hellraisers. John Carney with Gato Maximo, will also be performing at the Garden Party which will take place at the Panamonte Inn & Spa. Staring at 5:30 p.m. at Valle Escondido there will be performances by The Shuffle Demons, Joe Louis Walker, and The Lowrider Band.  In the evening there will be a Jam at Baru starting at 10:00 p.m.

On Saturday the 11th, performances start at noon at Valle Escondido. The day will bring music by Guy Davis, Marshall Keys, Scott Ambush and Alexander Brown, Dwayne Dopsie and the Zydeco Hellraisers, and Lowrider Band.  On Saturday there will also be a double Jam at the Rock/Riverside with simultaneous Jazz and Blues Jams being performed on two stages.  The Jazz Jams will be hosted by Patricia Zarate, Maria Rivas, Scott Ambush, Marshall Keys, and Alexander Brown. The Blues Jam will be hosted by Carolyn Wonderland, Dwayne Dopsie, Ron Hacker, Randy Oxford, and Lee Oskar.

On Sunday the 12th, the final day of the festival Patricia Zarate and Danilo Pérez Foundation, Maria Rivas and Carolyn Wonderland will be performing from noon at Valle Escondido. To close the Valle Escondido potion of the festival with a bang there will be an All-star performance led by Deanna Bogart with all the favorite festival artists. In the evening the final Jam with everyone will take place at Mike's Global Grill.