Holiday traffic plan will not be used on weekends 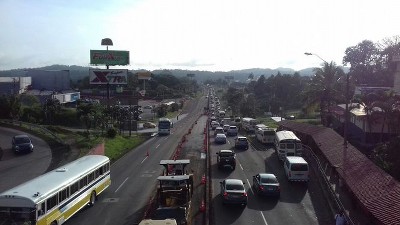 Wednesday December 7th 2016, Police Director Omar Pinzon clarified that the traffic reduction plan in place for December, for those communting between Panama and Panama West, will only be carried out on weekdays.

The traffic plan, which involves making parts of the highway one-way during certain hours, either going into the city or coming out to the beaches, has been used to alleviate traffic from Panama West to Panama City.

However, Pinzon explained that during the holidays the plan will not be in place on weekends, or seemingly holidays as the plan was suspended for Thursday December 8th which is Mother’s Day in Panama. This means on weekends and likely on holidays as well, traffic will flow as it normally does (2 lanes going in, 2 lanes going out).

With the traffic alleviation plan only in place on weekdays, this means that there will be three lanes going into the city from Coronado and surrounding beach communities from morning until early afternoon throughout the month of December. This will make it difficult for those traveling in the opposite direction on weekdays as there will only one lane available in areas from Panama City to Panama West.

Pinzón's statements were made at an inspection of the Pan-American Highway, during which he explained that meetings continue to be held to help with the flow of traffic during the holiday season.