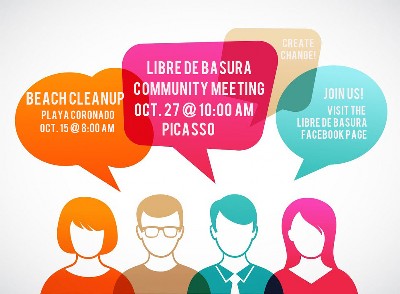 Looking to make a difference in the community? Join the Libre de Basura (LDB) team in their efforts to clean up Coronado and surrounding beach communities! Get to know the LDB group is to attend their public meeting this month on October 27th, 2016 at Picasso Restaurant starting at 10:00 a.m.

Here is a list of the Libre de Basura volunteer positions that the group is currently seeking to fill.

Anyone can be a part of the work that Libre de Basura is doing in the beach community! Join the group in their efforts to foster community involvement and educate on the proper disposal of garbage and recycling by joining an upcoming beach cleanup here is the 2016 cleanup dates for the rest of 2016. For more info on locations visit the Libre de Basura Facebook page.

All Coronado cleanups will be meeting at the public beach access in front of the Coronado Bay at 8:00 a.m. Changes to locations meeting points may occur, check the LBD Facebook page for updates.

The Grogona cleanup team will be meeting at the entrance to Gorgona.