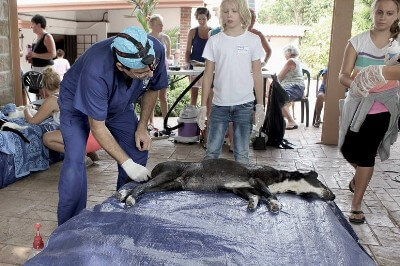 The organization also helps by cleaning them up (removing ticks and fleas) and by giving them medication after the operation.

The first pet owners had their pets lined up to be spayed or neutered by 7:30 a.m. By 9:30, the school was packed! There were about 40 volunteers and over 100 pet owners, not to mention all the pets. The high school students were selling snacks and drinks, they were also helping out by showing videos about pet care. The Middle School students had made posters about pet overpopulation and common health problems for dogs and cats. When the animals first came in, the owners took them to get a number for the operation, then they sat down to wait for their turn.

There were three veterinarians and six stations for the animals to be treated. There was registration, where the owners got their numbers; the place where they got their shots and got shaved, the operating tables, the post-op tables where they got shots for antibiotics, pain and internal parasites, and their incision cleaned.

The first one of us arrived at 7:00 a.m. and helped the volunteers unload the cars and set up the tables for the veterinarians. Our part was the recovery station. One of the organizers guided us to the station and showed us how to clean the pets with the proper equipment. We used tick and flea spray, alcohol, Q-tips, gauze, tweezers and eye drops.

Recovery involves cleaning. This sounds easy but it was quite exhausting, and it isn't the same process for cats and dogs. When dogs are in recovery we needed to clean them with tick and flea spray and clean their ears with alcohol. We used tweezers to get the ticks off. Dogs had ticks in their ears, between their toes, and under their armpits. One of the dogs had mange and had to be separated from the others. He got extra medicine to help him. A man brought in three black puppies and left them. Some of us walked around with them to try to find homes. By the end of the clinic, two had been adopted and another had a foster home.

When the animals came in they got numbers, but the cats went first because it takes them long to wake up after the anaesthesia. Cats are different from dogs in recovery. First, we had to put drops in their eyes because they don't close their eyes under anaesthesia. Then they have to get a towel on their heads so their eyes don't burn from the light. Cats can't get the parasite injection because it is poisonous for them. To monitor them we had to massage them and turn them every 20 minutes so they didn't become paralyzed. One of the puppies also took a long time to wake up, but a vet talked to us and explained that puppies take longer to wake up because they are smaller.

The last student volunteer left at 5:00 p.m.  A lot of us stayed after our shift ended because we felt responsible for the animals we were taking care of in recovery.  We all had a good time and learned a lot. Some of us want to volunteer at the next clinic!

Spay the Strays works to provide low cost sterilizations helping low-income pet owners reach their goal. By promoting responsible animal ownership and education, they strive to solve the problem at the root. To learn more about the organization or volunteer at the next clinic contact:  lilbob304@hotmail.com