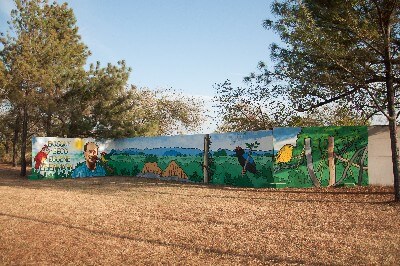 Coronado and surrounding coastal communities are located in what is known as Panama’s ‘Dry Arc’ (or Arco Seco in Spanish). The name is derived from the pockets of tropical dry forest scatted through regions. Like the name suggests, this region of Panama enjoys some of the best weather in the country.

The allure of sunny summers with little to no rain has lead to rapid real estate development and an increase in tourism at the beaches. The natural condition of dry forests, with low lying trees and shrubs make them easy for humans to clear. As a result, the dry forests along the dry arc have quickly disappeared.

The tropical dry forest is the most threatened of the major tropical forest types, even more so than the tropical rainforest. When the Spaniards arrived in the Western Hemisphere, there were 550,000 square kilometers of dry forest on the Pacific coast of Mesoamerica (an area extending north from Panama to western Mexico). Today, only 0.09% of that region (approximately 480 square kilometers) has official conservation status, and less than 2% is sufficiently intact to attract the attention of the traditional conservationists.
Thought to be less rich in total species than their tropical counter parts, dry forests are often overlooked, even by conservationists. However, research suggest that faunal species richness is actually quite high in the Panamanian dry forests, with a total of 519 recorded vertebrates alone. But it is not only the number of species in a dry forest that must be protected. The interaction between species and the perseverance of those species also offers great insight into the natural world. Hidden in the dry forest is a world of untapped knowledge that humanity stands to benefit from.

The great ecological importance of Panama’s dry forests stems from the location of the isthmus. Panama is part of an important biological corridor known as the Mesoamerican Biological Corridor, a region consisting of Belize, Guatemala, El Salvador, Honduras, Nicaragua, Costa Rica, Panama, and some of southern Mexico. The area acts as a natural land bridge connecting North America to South America for migratory species. The corridor aims to make the conservation movement a social and group effort, one that connects governments and people, crossing geographical borders. While 10.7% of the corridor is protected, in more than 40% of conservation areas, protection is not effectively enforced.

Conservation organizations that enforce global policy to protect the environment are vital, but there is another piece to the puzzle, and that is individual action. One group leading by example with small, but important actions is Libre de Basura Panama (Litter Free Panama). Each month the group hosts beach and street cleanups, encouraging people to join in group events and take the initiative to pick up litter. Last month, a mound of trash accumulating in the Coronado Dry Forest Reserve was brought to the groups attention. Twelve volunteers set off to clean it up, among them was Wynanda Tribaldos Eisenmann who had heard about Libre de Basura and their efforts and wants to help.

Items found in the dry forest included plastics, metals, and various construction materials. The group worked for two hours collecting the trash. After the clean up, Libre de Basura volunteers worked together to develop a plan, not only to continue to clean the area, but to create infrastructure to discourage littering and educate on the negative effects of dumping. The group is currently working with the Coronado Residence Association on greater protection for the area, future cleanups and educational walks through the dry forest.

The Coronado Dry Forest Reserve was created in honor of Eugene Eisenmann, a dedicated conservationist and expert on Neotropical birds. It is the largest, best conserved and most easily accessed dry forest reserve in Panama. At about 45 hectares, this small piece of natural history acts as a research lab from which the knowledge needed to replenish the dry forest habitat can be gained.

The Coronado Dry Forest Reserve is one of many public places Libre de Basura is working to keep clean. Founder of the group Alison Date first began the project cleaning up the land in front of the Roberto Eisenmann Public School on the PanAmerican highway in Coronado. Today, several large trash bin sit in front of the school by the busy bus stop at the Coronado intersection. The school, local businesses and volunteers contribute to the effort of keeping the area “litter free”. The students are extremely proud of the project, having helped out by painting the trash cans while learning about litter and the negative effects it has on the environment in their classrooms.

Panama as a country still has the chance to preserve and replicate habitats. This opportunity is priceless. In order to take advantage of it all must participate - from the scientific community by writing an executing conservation plans, to conservation organizations by lobbying for greater protection of natural habitats. Finally the responsibility to use less, reuse more and disposing of the trash we do create, is all of ours. By sharing the beauty of our natural world and educating on how to protect it, we can encourage small actions that will eventually join together the complete the puzzle of environmental change.

The dry forest in Coronado is accessible just past the main gate entering Coronado community, and from walking paths near the Residents Association trailer. The paths are about 40 minutes long, they are well groomed and marked making for easy navigation.