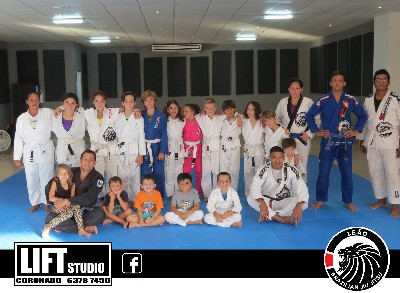 By: Roberto Diaz It’s better to be a warrior in a garden than a gardener in a war! - Martial Arts Proverb Brazilian Jiu-Jitsu (BJJ) was a huge surprise for me.  I was living in California and had recently turned 38 years old when a friend dared me to come try a class where he was training.

His kids attended the same academy as well.  Although I had never studied martial arts and I was scared out of my mind, I decided to go. It took several classes before I felt comfortable, but soon I was hooked.

Up to that moment, the biggest passion in my life had been surfing. Having grown up riding waves in Panama I fell in love with the feeling of living solely in the moment.  When one is surfing time seems to stand still.  You don’t think about work, bills, or problems - you are fully focused on the task at hand, riding waves.  Nothing in life has given me that type of feeling until I tried BJJ,  perhaps that is why great surfers like Kelly Slater and Joel Tudor practice it religiously.

When I moved back to Panama I was thrilled to be able to continue practicing BJJ, but what’s more is that I’ve been able to practice with a World Champion, and you can too! Leonardo Gonzalez, BJJ world champion and black belt, recently opened an academy in Coronado located at Lift Studio across from the Coronado Equestrian Center. Gonzalez offers classes Thursdays at 4:30 PM for children, adults at 5:30, and on Saturdays starting at 10am. For kids, it starts from age 4 (depending on individual child) and no age limit for adults but it depends on their physical condition.  No experience is required.

Jiu-Jitsu is different from other forms of martial arts. It is said to have been developed by monks who were constantly being robbed by bandits when they went to obtain food and supplies to bring back to their monastery.  It became such a hardship for these religious ascetics that they decided to forgo their "turn the other cheek nature" and defend themselves in order to survive.  They carefully crafted a self- defense practice that would minimize aggression by not punching or kicking, and that would use the opponents’ weak points.  This is known as joint manipulation and the cutting of oxygen through different styles of chokes.  Their art also emphasized the use of leverage, finesse and skill versus brute force.

When you train with a good instructor, you don’t ever feel like he is using force against you, it is more like a subtle energy. The goal of a BJJ practitioner is to defend themselves by utilizing the least amount of strength and effort. BJJ is an intense cardiovascular workout. In every class one does core work, like sit ups and push-ups. The practice also helps to reduces stress and keeps its practitioners living in the moment.

While BJJ has offered me an outlet for aggression, an excellent work out, and a wide range of training in self-defense it also brought something very unexpected into my life...peacefulness.  Learning how to fight has showed me that I don’t need to fight most battles.  It has made me more centered and calm.  The list of benefits that can be achieve through practicing BJJ is extensive, and different for each person. The best way to find out how BJJ can benefit you and the people around you is by giving it a try.

Join myself, and World Champion Leonardo Gonzalez in class this week - you won’t regret it! Classes for adults are Thursdays at 5:30pm & Saturdays at11:30p.m. and offered at the cost of $50 per month. For more information contact Stuart at 6378-7430