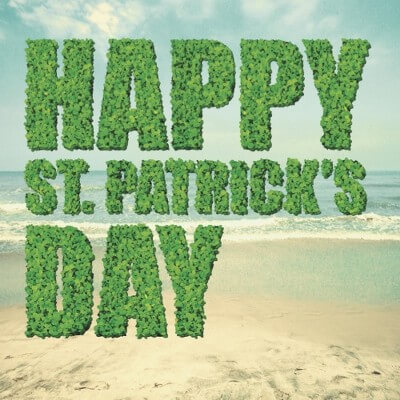 If you are unfamiliar with the holiday St. Patrick’s day, it’s not to late to join in the festivities and get a taste for this Irish Festival here at the beach. Caracoles in Coronado, now located across from the Coronado Equestrian Center will he holding a traditional Irish dinner from 5:00 p.m. onwards.

The traditional meal includes colcannon croquettes and smoked fish pancakes, Irish soup with Irish soda bread to start and Bailey’s sherbet to cleanse the pallet before the main course. The main course is Shepherd’s Pie with Irish bread pudding for dessert. Dinner is offered at a cost of $30.00  For reservations call: 389-5707 or email MKT@caracolescafe.com

Want to know about about the holiday? Here is a bit more on St. Patrick’s day and it’s origins.

St Patrick is known as the patron saint of Ireland. While he was not born Irish, he became an integral part of the Irish heritage, mostly through his service across Ireland in the 5th century.  His birthplace is said to be in either Scotland or Roman England.
Patrick was growing up in Britain, when one day a band of pirates landed in south Wales and kidnapped him, among many others.  He was sold and imprisoned for 6 years in Ireland, after which he escape to France where he joined a monastery and studied under St. Germain.

He became a bishop and followed his dream that the Irish were calling him back to Ireland to tell them about God, he converted the Gaelic Irish, who were then mostly Pagans, to Christianity baptizing and confirming with untiring zeal.  Through active preaching, he made important converts even among the royal families. This fact upset the Celtic Druids. Patrick was arrested several times, but escaped.

For 20 years he had traveled throughout Ireland, establishing monasteries across the country, he set up schools and churches which would aid him in his conversion. He developed a native clergy, fostered the growth of monasticism, established dioceses, and held church councils.  It is said that he used the three-leafed shamrock to explain the concept of the Trinity; which refers to the combination of Father, Son, and the Holy Spirit.   It is said that Saint Patrick had put the curse of God on venomous snakes in Ireland  and drove them into the sea where they drowned.

Patrick's mission in Ireland lasted for over 20 years. He died on March 17, AD 461. That day has been commemorated as St. Patrick's Day ever since.
Originally a Catholic holy day, St. Patrick's Day has evolved into more of a secular holiday.